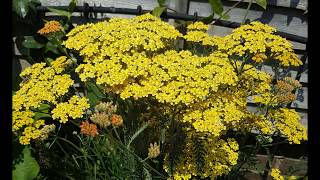 Yarrow (Achillea millefolium) A perennial plant with feathery dark green leaves and heads of white or occasionally pink flowers during summer and early autumn, it can be found on roadsides and in meadows. Achilles used yarrow as a field dressing for the wounds of his soldiers during the Trojan war, he obviously didn’t have enough left to use on his heel… The herb was often referred to as the Devil’s plaything and indeed during the 17th Century a woman was tried as a witch for